The city of Tarragona is one of the oldest cities in the Iberian Peninsula. It has been World Heritage Site since 2000 for its outstanding Roman archaeological site. Today’s Tarragona has around 130,000 inhabitants and is a city open to the Mediterranean Sea, bright and friendly, combining modernity, history and tradition. Its people live with respect for the Roman and Medieval past and make their traditions their way of life: the “castells” or human towers, the festival of the patron saint, Santa Tecla, the Mediterranean diet, Easter processions…. The old town, the so-called Upper Part, the Rambla and the Mediterranean Balcony are the pride of the city.

Founded as a military base in the 3rd century BC by the Scipio brothers, it became one of the most important cities in the Roman Empire. Tarraco was a flourishing city of 40,000 inhabitants, capital of the Hispania Citerior Tarraconensis.

Stunning public buildings were built there, the remains of which can be found in the streets of the present city: the Forum of the Province, which housed a temple dedicated to Augustus on the top of the city; the Circus, a place for chariot races, the great Amphitheatre, home to gladiator battles, executions and beasts.

With this tour we will visit the Roman monuments that are preserved in the Upper Part of Tarragona, its historic centre.

The visit begins at Portal del Roser, an access built in the 16th century on the Roman wall. After our presentation, we will start the tour at the model of Tarraco, an impressive model of 20m2 that shows us the Roman city at its peak. We will then visit the Archaeological Walk, which surrounds the city wall. We will continue our walk through the Upper Part, through the streets of medieval origin. In this space we will find more Roman remains, such as those of the Provincial Forum, numerous pedestals with Roman epigraphy, recycled as ashlars in later buildings. Also the Cathedral of Tarragona, located at the point where the Temple of Augustus was erected. The visit to the Cathedral is also optional. Then, we will go to the Roman Circus where we will discover its inner structures: we will go down to the vaults that supported the stands and we will know about the daily life and the Roman shows. We will finish the tour in the Amphitheater, where we will talk about gladiators and from where we will contemplate beautiful views to the sea.

Optionally, you can also visit other monuments on the outskirts of Tarragona: the aqueduct or the Médol quarry.

Duration Service: 2 to 3 hours, depending on the monuments you want to visit. 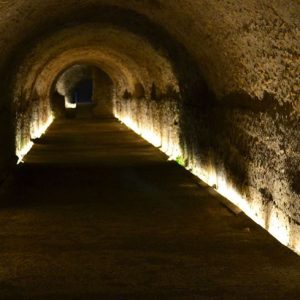 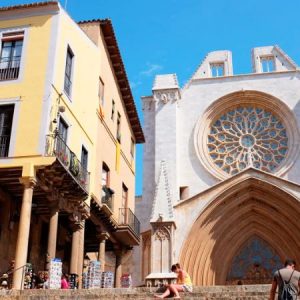